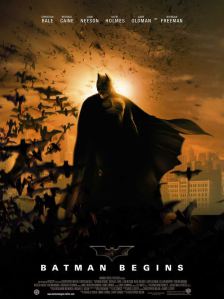 I remember watching Batman Begins some time back, but it was great to watch it again recently!

The Batman story is one which has been established for many years and has changed with the times, from comic books, to TV series, cartoons and films.  There have been a number of film productions based on the Batman story; with the most recent one being ‘The Dark Knight’. This story is still very clear in my mind; however I recently watched “Batman Begins” which is the prequel of The Dark Knight.

Batman Begins provides the origin story, ie how Bruce Wayne came to be Batman.  We see Bruce Wayne come to realise that his home, Gotham City, had turned into a crime infested abyss. He is driven to fight this crime and he chooses the bat as a symbol that would create fear in criminals.  It’s quite interesting how this evolution from boy to man to Batman takes place.

Bruce was born into an extremely wealthy family which has great influence in Gotham City.  Bruce’s father in the film is presented as a positive man who is looking to create a positive impact on the city.  His relationship with Bruce is strong and this desire for change and helping those less fortunate is what focuses Bruce Wayne’s mindset on there being a greater purpose.

This isn’t an immediate change which happens over night.  The character puts himself in situations where he is forced to behave in an unnatural way to understand the problem and learn how to resolve it.  The character sets himself challenges throughout his life and conquers fears that develop this mindset to change things for the better.

It may sound strange to talk so highly of a comic book character.  But the story does makes you question how far one could you go as an individual to make a positive impact on the world around you.  It’s a great film to watch that delivers a message of protection and fighting for what’s right.

If you have not seen it yet, I would highly recommend it.