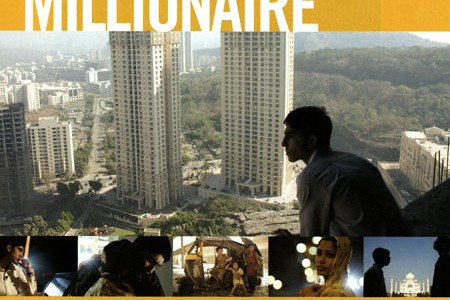 On Monday 8th of December I went to a screening of Slumdog Millionaire. BBC’s culture show were filming and conducting short interviews to gauge opinion. In some ways it had many similarities to your standard Hindi movie… However being directed by a British film maker it was not to be.

The music, the love story elements are there.. But there were no ‘dance’ scenes’… Or were there? (you will have to watch and see). The film was directed by Danny Boyle, known for Trainspotting and 28 Days Later. The film was very entertaining. Visually the film copes well with capturing India’s blur of colour and vibrancy, which many of Bollywood movies do so well.  Many ‘action’ films of today have very fast moving scenes. Almost impossible to follow… This is not an action movie as such but everything moves at a swift pace and as a viewer you are able to appreciate the scenes on offer.  There is a swift mixture of emotions which leaves you eager to know what’s going to happen next. I don’t want to give too much away. Let’s just say it’s the most entertaining incarnation of Who wants to be a Millionaire I have seen. Great art direction and cinematography.